Sleep apnea treatment options have improved over the years

Sleep apnea treatment options have improved over the years

In the 40 years since sleep apnea treatments have become available, options have improved. 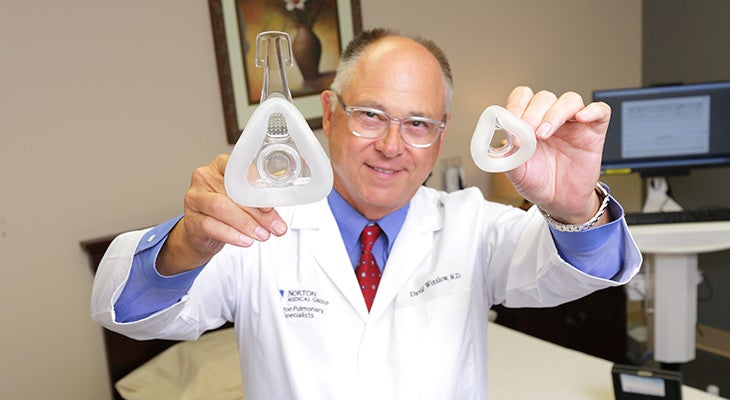 Although the science of studying sleep dates back to the 1920s, it’s only within the past 40 years that physicians have been able to diagnose and treat one of the largest groups of people with sleep disorders — those living with obstructive sleep apnea (OSA).

Roughly 10% of U.S. adults — an estimated 22 million — have moderate to severe sleep apnea.

“As a pulmonologist in the late ’70s, primary care physicians and cardiologists were referring patients to me with what they had diagnosed as end-stage chronic obstructive pulmonary disorder (COPD), which is an umbrella that covers many breathing disorders,” said David H. Winslow, M.D., sleep medicine specialist with Norton Pulmonary Specialists. “But as I would talk with these patients, I was discovering most had an obstructed airway during sleep.”

The only treatment option at that time was a tracheotomy, which is invasive and leaves the patient with a permanently open airway. But the treatment worked, and patients who opted for it recovered from medical conditions as serious as heart failure, according to Dr. Winslow.

Sleep Apnea Can Cause Many Serious Health Issues

Physicians now know OSA has a significant impact on overall health, ranging from obesity to foggy thinking to a host of heart issues, including sudden cardiac death. About 50% of people who have a heart attack or stroke also have OSA.

“With OSA, a person stops breathing during sleep. In most cases, when someone stops breathing it shocks them back and they wake up,” he said. “But those sudden stops and starts of the cardiovascular system can lead to heart arrhythmias, atrial fibrillation, heart failure, heart attack and stroke.”

Learn the link sleep disorders have to heart disease

For the Care You Need Now

If you suspect sleep apnea, talk with your primary care provider, who may refer you to a sleep specialist.

By the early 1980s sleep labs were created to conduct sleep studies. The first sleep lab in Kentucky was at what is now Norton Audubon Hospital. At that time, most referrals were from wives who couldn’t sleep because of their husbands’ snoring.

“Although statistically, OSA happens to both men and women, early on it was commonly known as a man’s disease. The loud snoring and gasping for air during the night would have wives in a panic and encouraging their husbands to have a sleep study,” Dr. Winslow said.

After a sleep study and diagnosis of OSA, patients would be sent home with a continuous positive airway pressure (CPAP) machine. The bedside machine consisted of a mask worn during sleep that increased air pressure in the throat to prevent the airway from collapsing.

Treatment for Sleep Apnea Other Than CPAP

The first masks were bulky and cumbersome; however, patients who could tolerate the awkward equipment reported much better sleep quality. Fortunately, technology advances have allowed for smaller, often more comfortable CPAP masks. A dental device can help some patients.

“The dental device helps move the lower jaw out farther when sleeping, allowing the airway to open more clearly. This is an alternative for patients with mild to moderate sleep apnea, but they have to be closely followed by their pulmonologist and dentist,” Dr. Winslow said.

In rare cases for patients who are unable to use the dental device or CPAP, Dr. Winslow offers hypoglossal nerve stimulation. This implantable device stimulates the nerves that control the airway while the patient sleeps.

Answer each question. Your score will appear at the end of the survey, then learn more about what your score means in the scoring guide.

Create your own user feedback survey

Use your total points out of 20, displayed at the top of the quiz when you submit your answers.