He underwent emergency surgery for dissected aorta at Norton Hospital 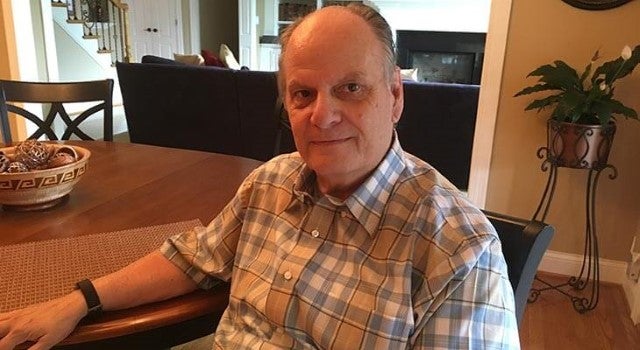 Louisville sportswriter Tim Sullivan returned home after covering a late baseball game. His wife, Lisa, was asleep, and he was on his computer winding down when he felt a sudden, severe pain in his chest.

“I’ve compared it to an elephant sitting on my sternum. Something happened. I didn’t know what,” Sullivan said.

When the crushing pain persisted, Sullivan woke his wife. She drove him to the Norton Brownsboro Hospital emergency department four miles from his Louisville home. That’s when he learned he needed emergency surgery for a dissected aorta, a life-threatening condition.

“I made a point of telling my wife as I was getting into the ambulance that she was the best thing that ever happened to me, and I wanted her to know that,” Sullivan said.

An ambulance transferred Sullivan, 62, to Norton Hospital, where a surgical team headed by Steven Etoch, M.D., waited to repair his heart.

IN HIS OWN WORDS: Heart repaired, but still cranky (from courier-journal.com)

Later, Sullivan tweeted: “If you have to have emergency heart surgery — and I did — can’t imagine better or nicer people than those caring for me at Norton.”

If you have to have emergency heart surgery — and I did — can’t imagine better or nicer people than those caring for me at Norton.

“I didn’t know what a dissected aorta was. I’d never heard of it before,” said Sullivan, father of two grown children. “But the gravity was clear by the reaction of the doctors.”

An aortic dissection can happen to anyone, but men in their 60s and 70s are at highest risk. In addition to chest pain, symptoms include:

Aortic dissections are rare, about 30 cases per million people. Chronic high blood pressure, hardening of the arteries (atherosclerosis) and structural abnormalities in the aorta all increase your risk for aortic dissection. Genetic conditions such as Turner’s syndrome and Marfan’s may also play a role.

As a sportswriter, Tim Sullivan is used to giving the play-by-play. He’s just not used to giving play-by-play about himself. Two weeks after his surgery, the Courier-Journal sportswriter said everything happened so fast he didn’t have much time to dwell on the danger he was in. About one in five people with an aortic dissection die before reaching the hospital, according to the online Merck Manual.

Less than two months after his treatment, Sullivan has returned to work. After initially needing more sleep, his routine is now back to normal. He said he’s trying to use the interest in his case to offer this advice to other men:

“See your doctor and heed what they say,” he said. “A lot of men my age are reluctant to go to their doctors for fear of what they may find out.”

How would Sullivan lead a story about his own aortic dissection?

“I’ve been toying around with various approaches. I keep coming back to this lead that would say something like, ‘I probably deserve to be dead based on my eating habits and lack of exercise.’”