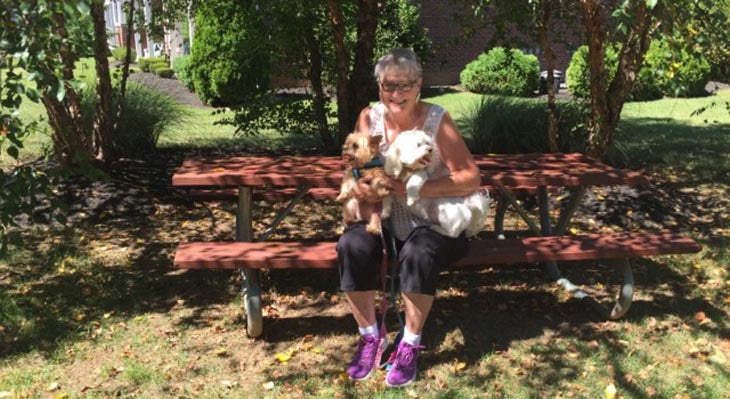 If you had to choose between having a stroke or losing your eyesight, which would you pick? It was not quite that black and white for Arlene Hampton, but close, when she was prescribed a daily pill to avoid having a stroke — a pill that caused her to permanently lose vision in her right eye.

Hampton is one of more than 5 million Americans living with nonvalvular atrial fibrillation (A-fib), a heart condition in which the upper chambers of the atrium beat too fast and with irregular rhythm (fibrillation). People with A-fib are at a greater risk for stroke.

Hampton was diagnosed with A-fib in 2013. She received a pacemaker to regulate her heartbeat and began taking a blood-thinning medication to prevent blood clots that could cause a stroke — both typical treatments for A-fib.

However, within the first 18 months of taking the medication, Hampton suffered seven significant hemorrhages (ruptured blood vessels), including one in her colon that put her in the hospital for two weeks. Two other hemorrhages landed her in the emergency department, and another affected her right retina, permanently taking her vision.

Hemorrhage is a major complication of blood-thinning medications such as warfarin.

“I’ve lived in fear of another hemorrhage or the possibility of losing my vision in the other eye as a result of taking the medication,” Hampton said. “But if I don’t take the blood thinner, I increase my risk of having a stroke.”

Hampton recalls talking with Robert A. Schwartz, M.D., cardiologist with Norton Heart Specialists’ Heart Rhythm Center, about her concerns. She remembers him stressing the importance of continuing her medication. But he also mentioned an implantable device that would be available soon — she just had to wait a little bit longer.

She and many others like her were waiting for U.S. Food and Drug Administration approval of a device that can help reduce the risk of stroke in patients with A-fib who, for medical reasons similar to Hampton’s, can’t take a blood-thinning medication for an extended period of time.

“The team at Norton Heart Care was selected by the manufacturer to serve as one of the early implant sites in the U.S.,” Dr. Morris said. “It is a groundbreaking alternative for patients with A-fib who, similarly to Ms. Hampton, have a risk of stroke without blood thinning medication, but have had bleeding complications when taking the medication.

The device is implanted through a one-time minimally invasive catheterization procedure that lasts about an hour and requires only an overnight stay in the hospital for observation.

Once a patient has the device implanted, it expands to fill in the opening of the left atrial appendage, which is the area where most stroke-causing blood clots form in people with A-fib.

Hampton received the device in April 2016 and is expected to be completely off her blood-thinner medication by the end of October 2016. She will take a daily aspirin. Since having the surgery, Hampton has embarked on a new health hobby of walking nearly every day for two hours. She is so thankful she feels well enough to accomplish this goal.

“Saving my vision as well as reducing my risk for stroke has given me back a peace of mind to live life to the fullest,” Hampton said.

If you live with A-fib and take a blood thinner, be sure to talk with your doctor about your options. For more information on the Watchman implant or Norton Heart Care, call (502) 629-1234.