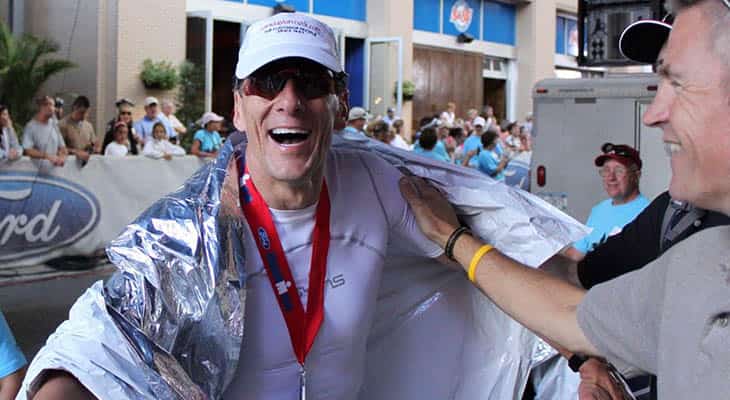 You wouldn’t look at Robert Taylor and think he survived a stroke. The 56-year-old is a poster child for good health. He ran the Boston Marathon, completed three Ironman competitions — including the national championship — in one year, and has participated in countless triathlons. Even a random 100-mile bike ride on a Saturday morning isn’t out of the question.

“I love the process of exercising,” Robert said. “I started running, biking and swimming with a group of buddies in 1985, and we’ve been doing it ever since.”

Robert takes good care of his body in many ways, inside and out — he doesn’t smoke, takes only the medicine prescribed by the doctor, and drinks very seldomly.

“I never thought I’d be the victim of a stroke,” he said.

A stroke happens when the blood supply to part of the brain is interrupted or reduced in one of two ways: narrowing of blood vessels in the brain caused by fatty deposits or blood clots, or when a blood vessel in the brain leaks or breaks. Your brain doesn’t get oxygen and nutrients it needs, and brain cells begin to die within minutes. The Centers for Disease Control and Prevention reports that every year, 795,000 people have a stroke — that’s about one every 40 seconds.

Dec. 29, 2017, started like any normal day. Robert finished his morning workout, went to work at Taylor Trunk Co., a local luggage company his family has owned for 135 years, ate a healthy lunch, and then went back to the office. He sat down, planning to watch the Louisville vs. Kentucky basketball game that evening.

He didn’t get back up.

“My daughter, Elyse, found me slumped over in my chair,” Robert said. “She said it looked like the right side of my face had melted. I couldn’t talk at all. I don’t remember much after that.”

Paramedics arrived in minutes. They quickly saw Robert was having a stroke and took him to Norton Brownsboro Hospital, one of only three Comprehensive Stroke Centers in Kentucky. Doctors gave him tPA, a clot-busting drug that can restore blood flow to the brain. But it wasn’t enough, and he needed surgery.

Hours between life and death

“Robert was experiencing a major stroke,” Dr. Dashti said. “He had significant blockages in his carotid artery in his neck and in his brain. He wasn’t getting blood flow to the left side of his brain.”

‘Wondering if I had died’

The following morning, Robert opened his eyes. His family, in tears, stood around him. Robert was oblivious to what had happened.

“I saw them around me and was wondering if I had died,” he said.

Once Robert realized he was still among the living, doctors asked him to perform basic tests, such as talking, lifting his arms and legs, and identifying pictures on note cards.

Amazingly, he did them all.

“Once I was told all of what happened, I couldn’t believe the result,” Robert said. “I should have died that night.”

Dr. Dashti points out that Robert’s case illustrates that a lot can be done both medically and surgically to save someone’s life when they are having a stroke. Every minute that emergency stroke care is delayed, millions of brain cells die. So bringing the patient to a Comprehensive Stroke Center as soon as possible is the most important step.

A lot to live for

Now, almost three years later, Robert is back to exercising and living life to the fullest. He still has mild trouble with speaking, though it’s not noticeable until he tells you. Otherwise, he’s doing great, which he credits to his lifestyle before the stroke, as well as the team that saved him.

“I’m proof that a stroke can happen to anyone, but I’m also proof that if you treat your body well, you can bounce back,” he said.

He’s back to exercising and running half-marathons.

Robert also achieved a milestone with his family in 2018. His daughter, Elyse, who found him nearly dead in his chair, got married. Robert walked her down the aisle.

When Robert and Laura recall that fateful night, they feel nothing but blessed.

“The doctors, nurses, paramedics — there were angels all over that hospital that night,” Laura said. “Thank-you is never enough.”

“This is one race I couldn’t do on my own,” he said. “A lot of people got me across the finish line, and for that, I’ll be forever grateful.”

Robert credits his faith in God and his medical team for his recovery.

“They told me I could get better, and I did,” he said.

Robert says he is not the same person he was before the stroke, but he likes the person he has become.