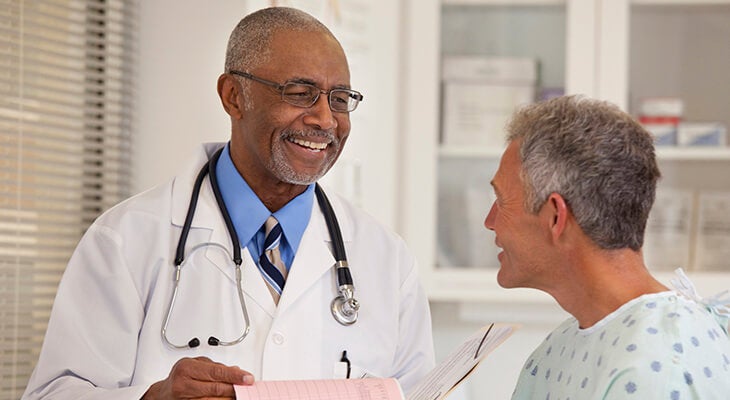 Should men in their 50s and older be screened for prostate cancer by getting a blood test to measure their prostate-specific antigen (PSA)? The answer to that question has changed over the past six years, and new information from the United States Preventive Services Task Force (USPSTF) still doesn’t settle it 100 percent.

The USPSTF, a government-sponsored but independent network of national experts in disease prevention and evidence-based medicine, is updating its 2012 recommendation. The group now says that men ages 55 to 69 should make an individual decision about prostate cancer screening with their health provider.

The task force recommends against routine screening for men age 70 and older. It points out that any questions about prostate cancer screening become a very different matter for men who have symptoms, such as trouble emptying their bladder or frequent nighttime urination. Men with prostate cancer symptoms should always seek further evaluation.

In 2012, the USPSTF recommended against PSA testing as a broad screening measure. An elevated PSA level may be caused by prostate cancer, but it also can be caused by other conditions, such as an enlarged or inflamed prostate. Because of this and other factors, the task force concluded back then that if a man had no increased risk factors, the potential harm of overtreatment outweighed the potential good of screenings.

New evidence, including information collected through 10 years of follow up as part of an extensive European study, helped change the group’s thinking.

How can I learn more?

The USPSTF recognizes the new recommendations may be confusing, so they have set up a user-friendly website for those with questions.

“This new information may seem complicated, but basically it comes down to having a trusted clinical care provider who can answer your questions about potential risks and benefits, and help guide your care decisions based on your history and values,” Dr. Flynn said.