This is but a moment in time | Norton Healthcare Louisville, Ky.

This is but a moment in time

This is but a moment in time

As we celebrate the life of Muhammad Ali, read about another inspiring hometown athlete living with Parkinson’s. 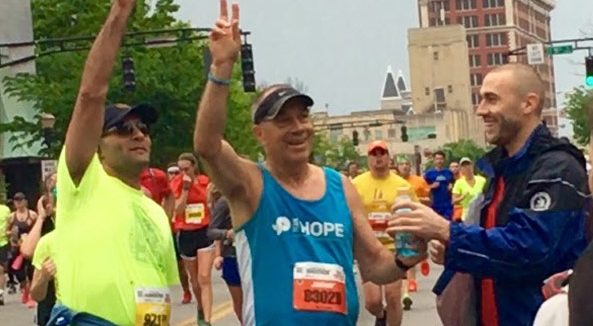 As we celebrate the life and accomplishments of “The Greatest” — Muhammad Ali — it brings to light the many athletes, dignitaries, humanitarians and everyday heroes who inspire us as they overcome adversity to keep living their dreams.

Louisville native Bill Reed is one of them. This spring’s Kentucky Derby Festival Marathon marked Reed’s 50th 26.2-miler — and 10th since being diagnosed with Parkinson’s disease.

In 2011, Reed, then age 60, was recovering from back surgery and noticed he had developed a finger twitch. Thinking it was related to his surgery, he mentioned it to his neurosurgeon, who referred him to Mohammad S. Alsorogi, M.D., neurologist with Norton Neuroscience Institute.

“This was a moment in time; not a defining moment,” he said. “I had goals I wanted to accomplish and this was not going to slow me down.”

Reed wanted his 50th marathon to be run in Louisville so he could celebrate with loved ones and his running group, affectionately called OMG (Old Man Group). On that April day, he had another special running buddy: Dr. Alsorogi, who ran the first 8 miles with him before completing the miniMarathon

When the two met in 2011, Dr. Alsorogi was thinking of running his first marathon. Inspired by Reed’s tenacity, he took his new pastime to the next level and ran the Kentucky Derby Festival Marathon in 2014. He and Reed then trained together for Dr. Alsorogi to run the Chicago Marathon while Reed trained for the Columbus Marathon.

“Mr. Reed is an inspiration to all,” Dr. Alsorogi said. “His optimistic attitude and confidence is remarkable.”

With his sights set on retiring from his furniture business later this year, Reed says he feels blessed to be able to remain active.

“Everything is currently managed with three medications, one of which is for sleep management,” he said. “I tell myself every day that I wouldn’t know I had Parkinson’s unless someone had told me I had Parkinson’s.”

According to Dr. Alsorogi, exercise is the No. 1 factor in slowing the progression of Parkinson’s disease.

“Research has found that 45 minutes of daily physical activity will help improve the odds of delaying the onset of disease progression,” Dr. Alsorogi said.

Reed agrees. Running has been his saving grace and he doesn’t plan on stopping anytime soon.