Until now, the only way to test for brain trauma was a CT scan 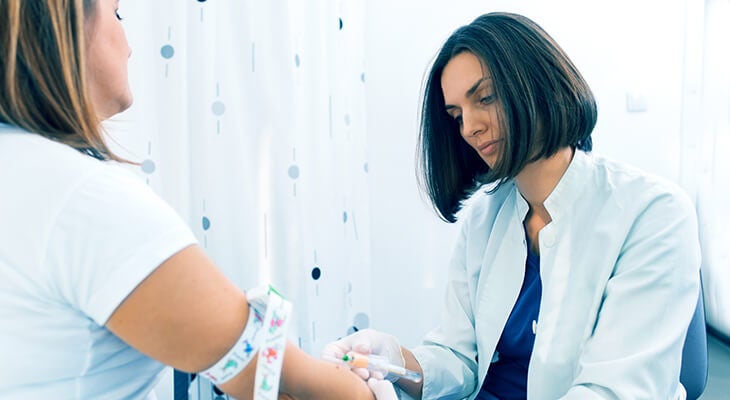 For the first time ever, doctors now can test for brain trauma with a simple blood test. The U.S. Food and Drug Administration recently approved the Brain Trauma Indicator, which was developed by Banyan Biomarkers Inc., in partnership with the U.S. Department of Defense and U.S. Army Medical Research and Materiel Command.

The blood test works by looking for elevated levels of two proteins, glial fibrillary acidic protein (GFAP) and ubiquitin carboxy-terminal hydrolase L1 (UCH-L1). When someone experiences a traumatic brain injury, those proteins are released from the brain into the blood.

Traditionally, brain trauma has been diagnosed with the use of a computed tomography (CT) scan, which identifies brain lesions. A blood test can help eliminate radiation exposure.

“That is a huge positive,” said Tad D. Seifert, M.D., neurologist with Norton Neurology Services and director of Norton Healthcare’s Sports Neurology Program. “Another positive is simply the cost — the cost of a CT scan is not inconsequential.”

The caveat: The Brain Trauma Indicator takes about four hours to produce results.

“In an emergency room setting, where timing is at a premium, I don’t foresee any ER physician using a blood test that takes four hours to produce results,” Dr. Seifert said. “They would just go straight to the CT scan.”

At face value, the new blood test seems like a groundbreaking discovery for the world of athletics, especially during a time when head trauma in National Football League (NFL) players has been such a hot-button issue.

However, Dr. Seifert, an independent neurotrauma consultant for the NFL, says we’ve not quite reached that game-changing moment.

“The problem with the Brain Trauma Indicator is that you wouldn’t be able to get any actionable results back until the game is over, rendering it impossible to make any in-game determinations as to whether an athlete should be pulled from the game or not,” Dr. Seifert said.

He does believe the Brain Trauma Indicator is a step in the right direction.

“There is really only improvement now that can be had from this,” Dr. Seifert said. “If they could even cut the turnaround time in half, from four hours down to two hours, that could be useful in at least an emergency room setting.”

Dr. Seifert doesn’t plan to regularly use the Brain Trauma Indicator, but he says he hopes it will serve as a point of evolution for researchers looking to bring us closer to a test that will generate more timely results.