Turning a hospital stay into a wedding day

Turning a hospital stay into a wedding day 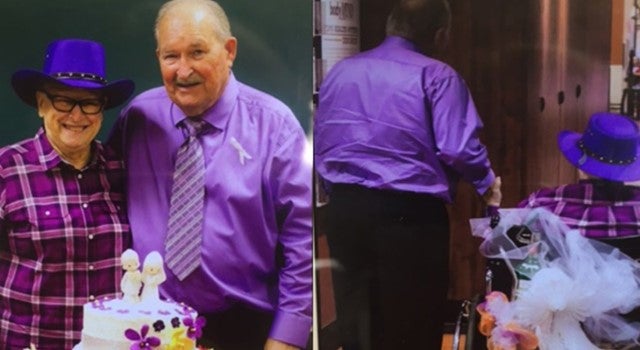 Susie Blanton has lung cancer and, even though she’s in the middle of chemotherapy, set a date to be married on Oct. 29, 2016. She and her fiancé, Bob Bailey, had been planning their wedding for several months.

On Oct. 28, Susie was running a slight fever and experiencing some weakness. As a precaution, her doctor recommended she check into Norton Hospital for a few tests. Not ideal the night before her wedding, but she figured she could make it work as long as she was out by 2 p.m.

Now worries, right? By now Susie, 73, had learned not to sweat the small stuff.

She was told she needed a pint of blood. Still, plans were on track for her to be home in time for her wedding. But then word came that she would need to stay another night. She was crushed.

Her nieces and nephews, family and friends had already decorated the church in her Fairdale neighborhood, set up the food for the reception and were awaiting the arrival of the bride and groom.

When the nursing staff heard Susie would not be released in time for her wedding and saw the disappointment on her face, the oncology/telemetry unit knew they needed to work a little magic.

Renee Kinnaird, R.N., took the groom, 82, to see the Norton Hospital chapel. Fearing it was too small, they set their sights on Wade Mountz Auditorium, across the hall from the chapel. It was the perfect location.

But what about the reception and all the food? The nursing staff sprang into action securing a private dining room adjacent to the cafeteria — a short escalator ride from the wedding venue. It was just the right size and could accommodate the couple’s 50 to 60 guests.

A bit later than planned and a little farther north than expected, the bride and groom became Mr. & Mrs.

“I never dreamed we could pull it off, especially in a hospital,” said the new Mrs. Bailey. “The staff was just adamant that I was going to be married.”

This isn’t a first marriage for either; both have been widowed for a few years. But this wedding will be one the Baileys and their family and friends will remember.

“The staff went above and beyond to make sure this wedding all came together,” Susie said. “We can’t thank them enough.”

The Baileys would like to thank the Norton Hospital oncology/telemetry unit as well as Christy Geary, house supervisor, for helping make their special day possible.