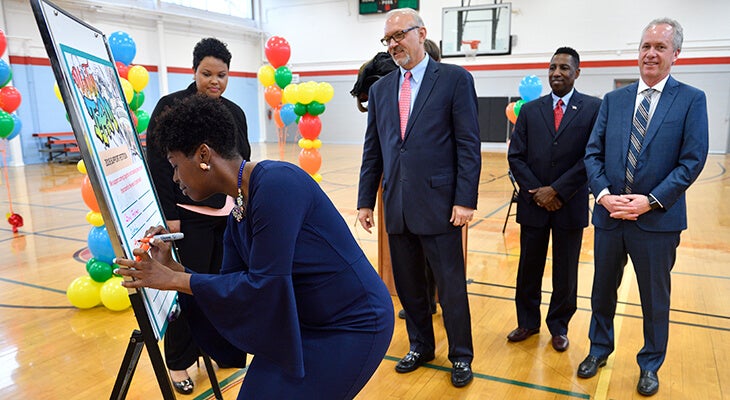 Representatives from Norton Healthcare joined with Passport Health Plan, community volunteers, and other supporters to announce a new venue for this summer’s Unity Jam. This health-focused event aims to bring the community together to improve access to health resources, especially for those in the area of the 40211 and 40212 ZIP codes – from Portland south through Park Duvalle.

Unity Jam 2018 will take place Saturday, Aug. 11, from 10 a.m. to 3 p.m. at the Molly Leonard Portland Community Center at 640 N. 27th St. The center, which is part of Louisville Parks and Recreation, offers a large venue for more booths with health information, free health screenings and demonstrations. Entertainment and children’s activities will include music, a dunking tank, face painting, games and plenty of other family-friendly activities.

School-age youth who take part in a scavenger hunt through all exhibits can earn a free backpack filled with school supplies based on Jefferson County Public Schools’ “needs for each grade” list. The supplies will be collected throughout the summer at “bus cram” events on Norton Healthcare campuses and other locations. Employees and community members are encouraged to bring supplies to help fill a donated school bus.

This year’s Unity Jam will have a block party theme. Organizers will contact neighbors of the community center with a petition seeking permission to close a portion of three streets during the event. Residents also can sign the petition at Molly Leonard Portland Community Center. Participants at the April 23 Unity Jam kick-off signed an oversized symbolic petition to launch the petition drive and show support for Unity Jam’s mission.

“Unity Jam is all about bringing people together to break down barriers that limit access to health care and other key resources,” Townsend said. “Last year’s response and success show what happens when great volunteers commit to finding a solution to a challenge and focus on making it fun!”

Matzek said about 3,000 lunches were given out last year as well. “One woman was so happy because those were the only meals her family would get that day,” she said.

Norton Healthcare launched employee resource groups in 2014 to give employees a way to connect, work on career development and drive change in our community. Five groups currently exist for African Americans, women, veterans, LGBTQ individuals and allies, and young professionals. Each group is open to any employee who wants to join.

Unity Jam 2018 is presented by Norton Healthcare with Passport Health Plan as an ally sponsor, and support from Louisville Parks and Recreation, iHeartRadio, Miller Transportation and Morrison Healthcare Food Service. Additional partners are invited and encouraged to get involved.

Synergy invites all types of health and community groups to sign up for booths at Unity Jam. Booths are available at no cost, but exhibitors are asked to provide useful handouts, takeaway items or some form of interactive demonstration or activity.

For more information about Unity Jam, go to nortonhealthcare.org/unityjam.