Raymond Martineau joined Norton Healthcare two years ago after he retired as an Army sergeant first class, a career that included a 17-month tour in Iraq, nine months in Afghanistan and six months as part of a peacekeeping force in Bosnia. 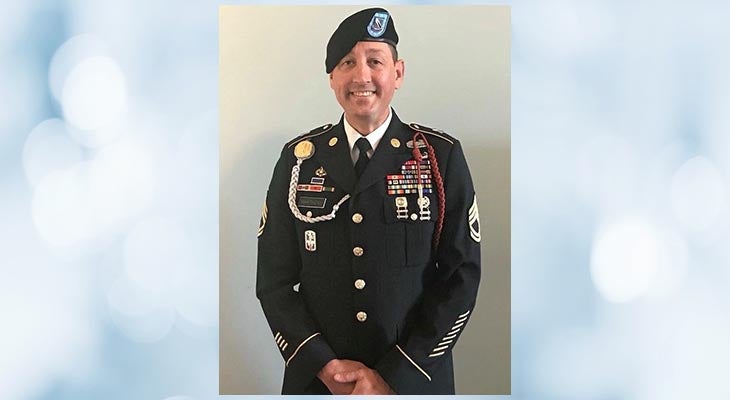 Leaning on his 24 years of service in the U.S. Army, Raymond Martineau takes a team approach to security training at Norton Healthcare.

“Your job may be done, but someone else might need help. Helping someone else can make their day better, and maybe they’ll return the favor to me when I need help,” Raymond said.

Raymond joined Norton Healthcare two years ago after he retired as an Army sergeant first class, a career that included a 17-month tour in Iraq, nine months in Afghanistan and six months as part of a peacekeeping force in Bosnia.

Through his service, Raymond gained a tenacious spirit and driven attitude.

“It [my service] showed me that regardless of the obstacles in front of you, you need to keep trying and you will reach your goals,” Raymond said.

In 2005, Raymond sustained a brain injury while traveling in an armored vehicle to a battle position in Iraq’s Anbar province, facing the last fighters of the Fedayeen Saddam. An explosion penetrated the vehicle’s hull a foot away from Raymond. Shrapnel shot through his face; he had battery acid burns and lost teeth.

It wasn’t until he returned to the United States that he realized the extent of the damage. Doctors told Raymond he’d have limited memory retention. He forgot minor everyday habits, like shaving and taking his car keys.

Not one to be overcome by obstacles, Raymond worked with doctors on retraining his brain through memory exercises that included virtual games and setting electronic reminders for basic functions.

“I persevered over the injury by not accepting the diagnosis and pushing the limits of my treatment,” Raymond said. “I’m almost fully recovered from my injuries.”

Raymond is an exceptional leader and asset to Norton Healthcare’s system security program, according to his leader, Joe Magaña, system director, security, safety and emergency preparedness for Norton Healthcare.

Raymond oversees Norton Healthcare’s security training and is the primary administrator for all security platforms, ensuring compliance with Norton Healthcare policies and standard operating procedures, as well as accreditation and regulatory statutes that pertain to security.

He also is the primary instructor for all security officers on Taser use, safe crisis management for health care workers, self-defense, metal detection and handcuffs.

“Raymond’s teaching style makes him an extremely effective instructor who is well-respected by all officers whom he shapes and molds as ambassadors for Norton Healthcare,” Joe said.

Raymond connects to other veterans at Norton Healthcare through an employee group.

“I’ve been able to reach out to other veterans for any support we may need from each other,” Raymond said. “It’s a great work atmosphere. We all care about each other. If there’s something going on, they’re quick to say, ‘Take care of it.’ I think that’s really important to helping myself and other veterans.”