Why I wear red: For the extra years I have with my brother | Norton Healthcare Louisville, Ky.

Why I wear red: For the extra years I have with my brother

Why I wear red: For the extra years I have with my brother

Sister credits early recognition of a stroke and decisive action for saving her brother’s life. 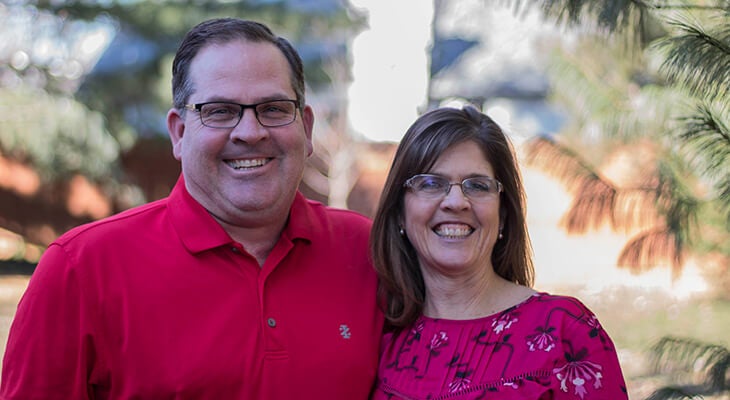 I wear red for my brother, Michael Brown, who at the young age of 40 experienced a severe hemorrhagic stroke.

We were driving to Michael’s home for his annual Christmas party one night seven years ago. We received a call from his concerned partner. Michael was having trouble walking up the steps and was talking like he was “drunk” even though he had not consumed any alcohol.

I talked with Michael on the phone and he seemed to stumble on his words. I mentioned I was worried he was having a stroke and recommended he go to an emergency room. But he was in complete denial and unaware of his symptoms. He told me he didn’t have time to go to the hospital, because he had 50 people coming over for the party and he needed to go take a shower.

We promptly called EMS anyway and thank goodness. By the time we got to the ER, his mental status was declining rapidly and he needed emergency surgery.

I believe my brother is alive today because we recognized his warning signs fast, called EMS promptly, and he received early treatment. He is now back to work and has reduced many of his risk factors: He stopped smoking, is exercising, eating healthier and managing stress. And last year, Michael’s partner became his husband.

I am so proud of Michael as he just became president of the Kentucky and Southern Indiana Stroke Association, where he provides stroke education and awareness.

As nurse coordinator for Norton Heart & Vascular Institute’s Women’s Heart Program, I have even more reason to stress early recognition and action during a cardiovascular event with every family I meet.

My brother’s stroke at such an early age means I’m at increased risk too. So I make it a priority to eat healthy, exercise and take good care of myself, including getting proper sleep and managing stress.

I have cherished the last seven years Michael and I have been fortunate enough to experience together. We have grown closer and enjoy life together. Just being able to talk and laugh, play a card game and spend time at the lake together are precious gifts I will always treasure.

The best gift you can give a family member is knowing how to save a life by being aware of the warning signs for stroke. Act fast by calling 911. Seconds count! Time saved is brain saved!