White pants are out and pink pants are in for 2017 Kentucky Oaks jockeys | Norton Healthcare Louisville, Ky. 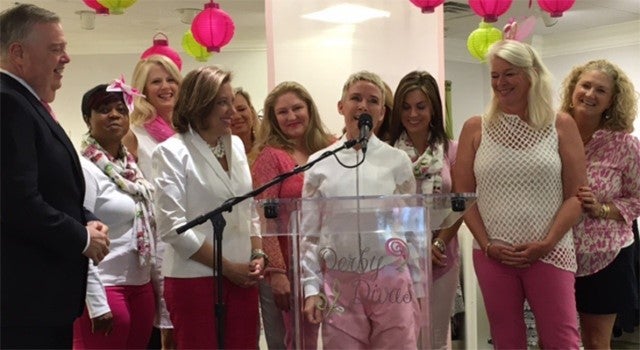 When the jockeys are called to the post for the 143rd running of the Longines Kentucky Oaks on May 5, for the first time ever, they won’t be wearing traditional white pants. This year, to complement the colorful racing silks they wear to identify their horse’s owner and/or stable, Oaks riders will don pink pants.

This historic change in traditional jockey attire required great team work and co-operation from various bodies that govern what jockeys are allowed to wear. The Jockey’s Colony at Churchill Downs, the national Jockey’s Club, and the Kentucky Racing Commission all got on board to make it happen as part of this year’s Oaks Pink Out celebration at Churchill Downs.

Churchill Downs launched the Pink Out in 2009 to raise awareness and funds for breast cancer and ovarian cancer programs and services. The aim was to focus on putting women’s health front and center with an emphasis on supporting and encouraging early cancer detection and screening mammograms for women in our community

“We know awareness and early detection are crucial first steps in fighting cancer and saving lives,” said Tammy McClanahan, R.N., Norton Healthcare, system vice president for adult and pediatric cancer services. “Survival rates for breast cancer are increasing thanks largely to screening and early detection, and that starts with awareness.”

Churchill Downs and Norton Cancer Institute announced a new charitable partnership this spring to raise funds to help provide care for women in our community who lack access to necessary breast health screenings and services. The new local partnership and Survivors Parade presented by Kroger are the centerpieces of the Oaks Day Pink Outcelebration.

Derby Divas also is part of the local partnership between Churchill Downs and Norton Cancer Institute. As a volunteer-driven community initiative, Derby Divas is committed to raising funds and awareness to provide life-saving mammograms and breast health services to women in our community who cannot afford them.

Members of Derby Divas joined with representatives from Churchill Downs and Norton Cancer Institute on April 20 to announce this year’s “pink pants” news. Donna Brothers, one of the most decorated females jockeys of her time who won over 1,100 horse races and is now an NBC on-track reporter, modeled the pink pants during the announcement.

Curious about other traditions and history associated with horse racing and what jockeys wear? Here are a few tidbits you may find of interest: