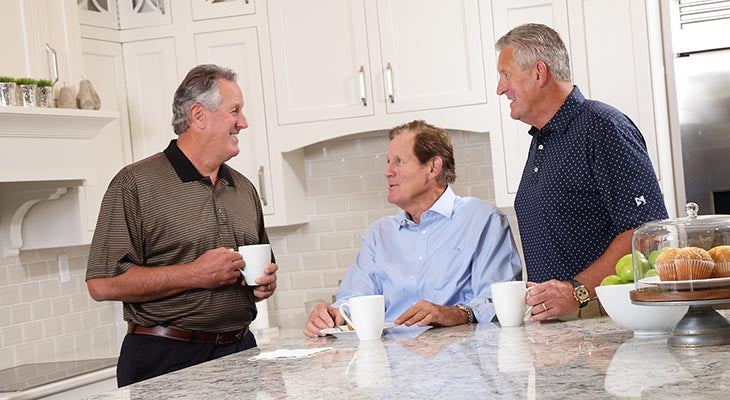 Larry King’s weekend in Louisville was in full swing. He and his wife, Paula, were enjoying it with family and friends. The mid-July Friday and Saturday included a 5-mile walk and a relaxing evening with friends.

But then Sunday came.

Larry, who was 51 at the time, woke up feeling a little sluggish, which is not normal. He and Paula and the children decided to ride down to Nolin Lake early Sunday morning. After tending to a few “lake chores” they were getting ready for a boat ride with neighbors. Larry wanted to cool off and decided to take a dip in the lake. After jumping in the water, he told Paula that he wasn’t feeling well and wanted to go up to the house to lie down.

“I just wasn’t feeling myself, but I thought it was the heat and humidity,” Larry said. “I told my wife I wasn’t feeling well and wanted to go inside to the air conditioning. Fortunately, she insisted that we go straight to the hospital.”

Paula drove Larry the 30 minutes or so to Twin Lakes Regional Medical Center in Leitchfield, Kentucky. Upon his arrival, the staff quickly identified that he was having a heart attack and triggered the heart attack response protocol, alerting interventional cardiologists and the catheterization lab at Norton Hospital in Louisville that a critical patient was on the way.

‘The Fast Ride’ to Norton Hospital

Norton Hospital would be about an hour’s drive, but at this point, every minute counts.

“I remember bits and pieces from that point, but I clearly remember seeing two helicopter pilots in my hospital room and them telling me I was taking the fast ride back to Louisville,” Larry said.

Once he arrived at Norton Hospital, Larry was stabilized and evaluated. It was decided to monitor his condition. Within a few hours the team at Norton Heart & Vascular Institute prepared to open a blocked artery supplying Larry’s heart using a stent he would implant by threading it on the end of a tiny tube through Larry’s blood vessels.

A stent was placed in the left anterior descending (LAD) artery — the largest of three arteries that supply blood to the heart.

The “widow-maker” is one of several types of ST-elevation myocardial infarction (STEMI) heart attacks. STEMIs begin with a sudden disruption of cholesterol buildup or plaque in the wall of one of the arteries that supply blood to the heart. The plaque that ruptures or erodes is often in a spot of relatively mild blockage, so the STEMI can hit without warning. Even stress testing beforehand may not show any reason for concern.

When the plaque is disrupted, the body’s clotting reaction is triggered, which can wind up blocking the artery completely.

With the supply of oxygen-rich blood limited, heart muscle starts dying within minutes to hours unless the artery can be reopened.

Emergency responders, hospitals and others in Kentucky and Southern Indiana are plugged into a well-orchestrated routine to race STEMI heart attack patients to one of Norton Healthcare’s three receiving hospitals for heart attack care.

Our specialists treat more people for heart and vascular care — about 250,000 every year — than any other provider in Louisville and Southern Indiana.

Larry’s scare and subsequent recovery prompted his two brothers to check on their own hearts and followed their brother to Norton Heart & Vascular Institute.

Jerry, the oldest of the three, needed a cardiac catheterization to open a few arteries that had narrowed. But just a few years later, at the age of 67, Jerry needed open heart surgery to bypass severe blockages. Having a second or even third procedure is fairly common for those who have a strong family history of cholesterol-related heart disease, according to their cardiologist. The plaque buildup requires ongoing evaluation, and sometimes, surgery is required.

David, the middle brother, had a diagnostic cardiac catheterization at age 59 that showed he has narrow arteries that can be treated with medication and lifestyle changes such as exercise and better eating habits. In 2018, David completed cardiac rehab, exercise under the watchful eye of cardiac nurses who monitor heart rate and blood pressure and is continuing to exercise, eat a healthier diet and reduce his stress.