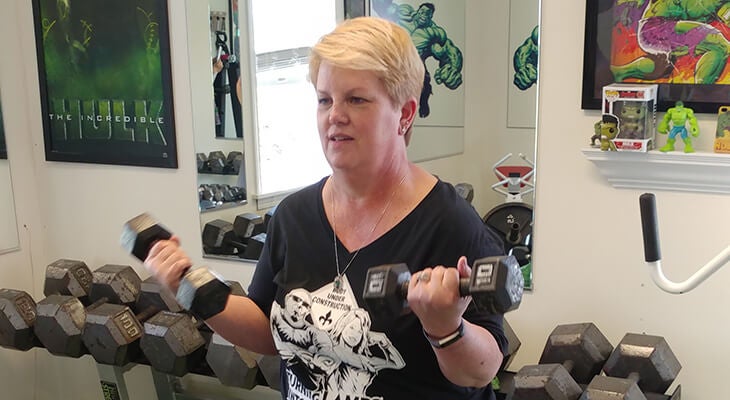 Back pain was Karyla Neutz’s reality — she woke up every day knowing she’d have to fight through immense pain.

Living with back pain?

Schedule an appointment with the spine experts at Norton Leatherman Spine Center.

She had degenerative spondylolisthesis, a condition that occurs when one vertebra in the spine slips forward onto another and severely pinches the nerves. It’s caused by aging and arthritis in the back.

She missed her grandchildren’s school programs and sporting events because sitting on bleachers was not an option. She was unable to enjoy the beach and feel the sand between your toes on a trip to Florida.

Karyla’s intense back pain shot down her right leg, rendering her nearly immobile.

“For me, I was ready to go into a nursing home it was so bad,” she said.

Daughter’s surgery showed her a pain-free life was possible

“If Dr. Owens was able to alleviate my daughter’s pain, could he do the same for me?” She wondered. She scheduled an appointment.

“A large part of our practice is treating men and women who suffer from the same condition Karyla was suffering from,” Dr. Owens said.

She was the perfect candidate for a lumbar laminectomy and midline lumbar interbody fusion, or MIDLF.

The purpose of the MIDLF surgery is to take the pressure off the nerves and stabilize slippage of the vertebrae. To accomplish this, Dr. Owens operated through a small incision in Karyla’s back. He inserted screws into the vertebrae to hold them in place so that they could fuse together into one solid bone.

“It uses special instruments and cameras to show me live feedback as to exactly where I’m placing the screws,” Dr. Owens said.  “With this technology, we can place the screws using a different trajectory. In doing this, we don’t have to detach as much of the back muscles from the bone. The exposure is similar to a laminectomy, which means less pain for the patient.”

The procedure typically takes two to three hours to complete, and about half of Dr. Owens’ patients go home the next day.

Karyla was up and walking the night of her surgery.

“And I had no pain at all. It was like a miracle to me. I literally had no more pain from that time on,” Karyla said. “I told Dr. Owens if he could get me back to walking on the beach again, I’ll be a happy camper.”

Karyla made it back to the beach. She no longer misses out on activities with her grandchildren. She goes bowling with her family and leads a more active lifestyle. She’s even hitting the gym on a regular basis and has lost 20 pounds.

“I’m now able to live,” Karyla said. “Everyone I know struggling with back pain, I send to see Dr. Owens with hopes that he can change their lives, too. I just think he is awesome and don’t think there’s a better doctor to do that surgery.”