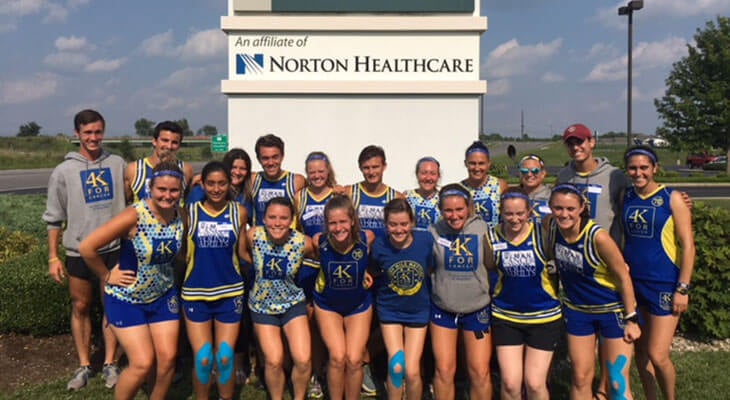 How far would you go to help stop cancer? This summer, 90 college-age students have been running 4,000 miles across the country — that’s about 5.6 million steps each — to support cancer programs and resources.

On July 24, one group of 19 young runners taking part in the Ulman Cancer Fund’s 4K for Cancer made a stop at Norton Cancer Institute – Corydon. The group started in San Francisco, California, on June 17. They will finish in Baltimore, Maryland, in early August.

According to Ashley Cooper, from Virginia Beach, Virginia, people sometimes miss the fact that they actually are running over 4,000 miles.

“They hear or see 4k and think that’s even less than a 5k community run,” she said with a laugh.

After arriving and enjoying some refreshments, half the group met with physicians, staff and patients to learn about their work and stories. The other half got massages at KORT Physical Therapy, who volunteered their services. The two groups then switched.

Group members, who ranged in age from 18 to 25, shared various reasons for doing the run. Several had lost family members to cancer or were honoring loved ones who survived cancer.

Audrey Moeglin, from Hudson, Ohio, said, “I run for kids who can’t run and play because of cancer.”

Many runners had names written on the backs of their legs in black marker. Isabelle Stern, a Virginia Tech student, explained:

“As we meet patients at a stop-over, we write their names on our legs to carry them forward with us on our journey,” she said.

At 5 p.m. the runners loaded into two transport vans. They headed to Salem, Indiana, where several area churches came together to host them and provide an evening cookout.

As a service project during their stay in Salem, the runners put together nearly 200 canvas tote “care bags” to leave behind for local patients undergoing chemotherapy. Staff and volunteers collected an array of items for the bags — everything from a fleece blanket and fuzzy socks to candies, lip balm, lotion and even a coloring book.

The next morning, the runners hit the road again for Cincinnati, Ohio.

Each summer the 4K for Cancer brings together young people cycling or running up to 4,500 miles across America. A team consists of up to 30 participants. This year, 90 runners embarked from San Francisco to three destinations: Baltimore, Boston and New York City.

Each participant raises a minimum of $4,500 for programs and resources that serve young adult cancer patients, whose needs may differ from other patients. Since its launch in 1997, the event has generated over $6 million and covered 100,000 miles.