A personal best after shoulder surgery

A personal best after shoulder surgery

Ever tried doing a handstand push-up on a damaged shoulder? That’s what a CrossFit star suffered through until surgery changed his life. 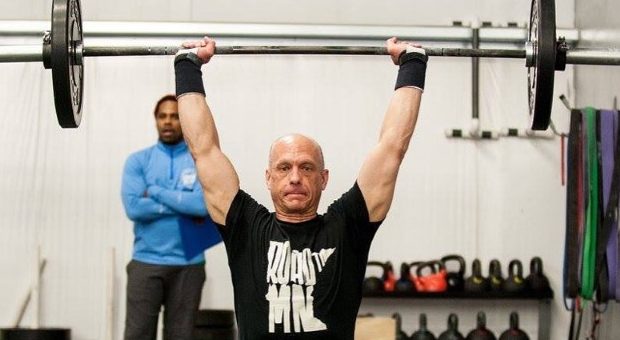 For many fitness enthusiasts, CrossFit is a good way to stay in shape. For 48-year-old Tim Wait, it’s a way of life.

Wait is described by many as a “super athlete.” He pitched in competitive baseball leagues until he was 45 and has always pushed his body to the limit. About four years ago, he decided to give CrossFit a try.

“I wanted to see what the buzz was about,” Wait said.

What started as an intense workout soon turned into an obsession. Wait fell in love with the weightlifting, the gymnastics, the push-ups— all of it. And he was good at it. In fact, he started competing in local and regional CrossFit competitions.

“CrossFit became a big part of my life,” he said. “I really pushed myself and was seeing good results.”

In the summer of 2014, Wait was doing some overhead weightlifting (which is common in CrossFit) when he suddenly felt pain in his shoulder. He tried to fight through it, but the pain kept getting worse and his mobility began to decline as time went on.

“I tried rehabbing the injury, but it didn’t help,” Wait said. “I really knew it was a problem when I was participating in a competition and couldn’t keep up.”

Following the competition, he reached out to Ryan J. Krupp, M.D., orthopedic surgeon with Norton Orthopedic Institute – Brownsboro and director of Norton Sports Health. It didn’t take long for Dr. Krupp to diagnose the injury.

Dr. Krupp is no stranger to shoulder injuries. He performs hundreds of shoulder reconstruction operations a year, many of them on athletes.

“Athletes who play sports that require overhand motion (such as baseball, tennis or CrossFit) are more prone to shoulder injuries,” Dr. Krupp said. “In Tim’s case, surgery was the only option to make a full recovery.”

“I admit I was worried,” he said. “Being fit and competing is such a huge part of my life. There was a part of me that feared I’d never return to the same level of activity and performance.”

According to Dr. Krupp, the average recovery time for rotator cuff surgery is four to six months, with many patients saying they see improvement for up to a year. And that’s for people who aren’t participating in extremely taxing sports.

Wait didn’t let that timeline slow him down. Three days after the surgery, he started physical therapy. Three weeks later, he was back in the gym doing light low-body exercise. Wait was doing upper body workouts by March.

“I really wanted to get back into competing,” he said. “Each day, I was getting stronger.”

Wait said by June he was 100 percent healed and was back to his high-impact, rigorous trips to the gym, including doing handstand push-ups. He competed in a local CrossFit competition in August.

“It felt great to be back,” he said. “I was competing at a high level again.”

What really surprised Wait was when he was qualifying for a national competition in September 2015.

“One of the qualifiers required an overhead exercise, which relied heavily on my surgically repaired shoulder,” he said. “Not only did I complete the exercise, I reached a personal best — even better than before the injury.”

The competition featured top-notch athletes from all over the country. He placed 11th in his age group.

“Based on the severity of Tim’s injury, it’s impressive that he’s recovered so quickly and it’s amazing that he’s competing at such a high level, especially since he’s not even a year removed from the procedure,” Dr. Krupp said.

Wait agreed: “I can’t believe how far I’ve come,” he said. “Thanks to Dr. Krupp I’ve been able to return to training at 100 percent and meet my goal of returning to competition.”