The rigors of military training put similar strains on the body as athletics. Sports medicine specialists like Scotty Newcomer, D.O., have training and experience to treat these unique conditions. 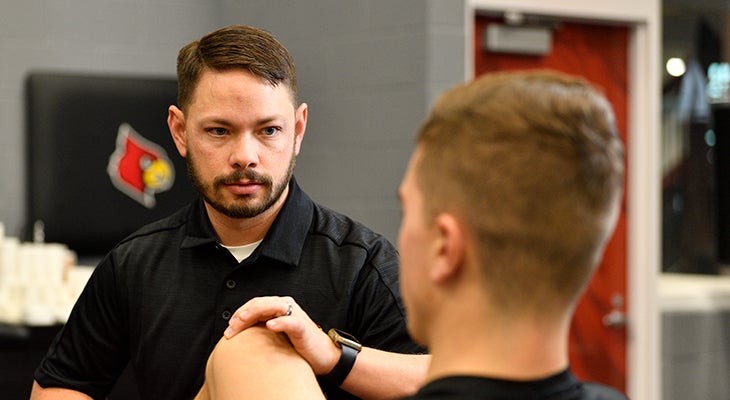 When sports medicine physician Scotty Newcomer, D.O., was offered a chance to treat soldiers from Fort Knox, he jumped at it.

Dr. Newcomer, an Air Force veteran who served six years active duty and four years in the Reserve, is a nonsurgical orthopedics and sports medicine specialist with Norton Orthopedic Institute.

He will see patients at the Norton Community Medical Associates – Heartland location in Elizabethtown, Kentucky, about a half-hour drive from the sprawling Army post. The Norton Healthcare system accepts TRICARE, the military’s health plan.

“It will be open to anybody, but the focus is on trying to reach out to veterans and soldiers at Fort Knox, providing a sports medicine physician for them so they don’t have to drive all the way to Louisville to be seen,” Dr. Newcomer said.

The rigors of military training put similar strains on the body as athletics. Sports medicine specialists like Dr. Newcomer have training and experience to treat these unique conditions.

“I know what they put their bodies through,” he said.

According to Brian Jurich, director of provider operations for Norton Sports Health, Dr. Newcomer brings a personal connection and commitment to the role of sports medicine provider in Elizabethtown and the surrounding Fort Knox community.

Book an appointment with Dr. Newcomer or another sports health specialist.

“He has a great interest and passion for the military,” Brian said.

Dr. Newcomer will be in the Elizabethtown office once a week, on Wednesdays.

In the fall, Dr. Newcomer also works as the lead physician for the University of Louisville football team, managing the health care needs of 125 student athletes. He helps athletes from other sports on Monday mornings in the training room.

Patients who see Dr. Newcomer in Elizabethtown can be referred for advanced diagnostics, such as magnetic resonance imaging (MRI), if needed. In Louisville, Dr. Newcomer sees patients at the Norton Orthopedic Institute location on the Norton Audubon Hospital campus.

From fixing aircraft to healing people

While serving in the Air Force, the future physician fixed electronic and environmental systems for F-15 and F-16 fighter planes, KC-135 tankers and C-130 cargo planes. He was stationed at Eglin Air Force Base in Florida and in Okinawa, Japan.

Two weeks after leaving the Air Force Reserve in Florida, he enrolled in medical school at the Philadelphia College of Osteopathic Medicine Georgia in Suwanee, part of the metro Atlanta area. It was a big career change.

“How do you go from being an aircraft mechanic to being a doctor? When a plane’s broken, I had to troubleshoot the problem and fix it. It’s the same with people; you have to figure out what’s wrong and help them,” Dr. Newcomer said.