Scotty R. Newcomer, D.O., will attend University of Louisville football practices. He also will be on the sidelines of the Cardinals home and away games. 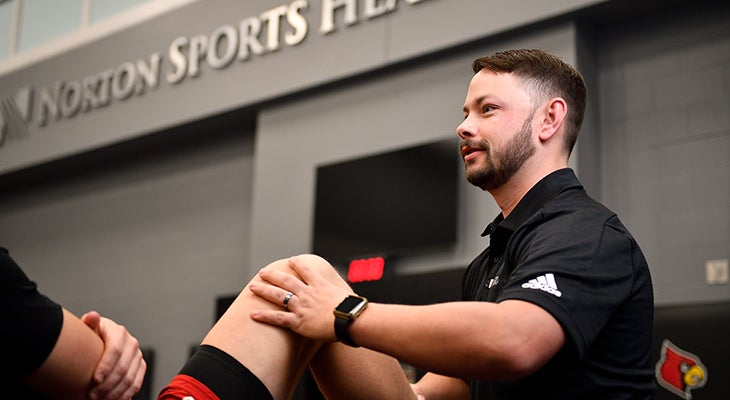 Norton Sports Health is adding physicians to its staff to care for the Louisville Cardinals dealing with the unique strains sports can put on the body.

“Success is seeing an athlete getting back healthy and playing again, seeing them do what they love and what they’re good at,” Dr. Newcomer said.

Norton Sports Health is the official health care provider of the Louisville Cardinals.

Dr. Newcomer will attend University of Louisville football practices. He also will be on the sidelines of the Cardinals’ home and away games.

Dr. Newcomer will be based at Norton Orthopedic Institute – Audubon.

“At the clinic, we see anybody from high-level athletes to weekend warriors to people with joint pain,” he said.

Norton Sports Health is the official health care provider of the Louisville Cardinals.

“I’ve always been big into playing sports,” said Dr. Newcomer, who grew up in an Air Force family. He played baseball and soccer in high school in Emmett, Idaho.

Before going into medicine, Dr. Newcomer followed in his father’s footsteps and served in the Air Force, fixing the electrical and environmental systems for F-16 and F-15 fighter planes, KC-135 tankers and C-130 cargo planes. He was stationed in Okinawa, Japan, and Eglin Air Force Base in Florida.

After the Air Force, Dr. Newcomer was volunteering at a clinic when he met a doctor of osteopathic medicine, who encouraged him to go to medical school. Dr. Newcomer attended the Philadelphia College of Osteopathic Medicine Georgia in Suwanee, part of the metro Atlanta area. He went on to residency in family medicine at the University of Tennessee College of Medicine Chattanooga. He was chief resident there. His fellowship in primary care sports medicine was at the University of Louisville School of Medicine.

“Ever since I went into medicine, this has been my goal. I always wanted to go into sports medicine,” said Dr. Newcomer, who is married with three school-age children. “It’s great to treat high-level athletes with a passion for their sports and see them get back to that point of peak performance.”