Last year, a stroke nearly killed John. He found himself the patient in one of the same rooms he often protects. 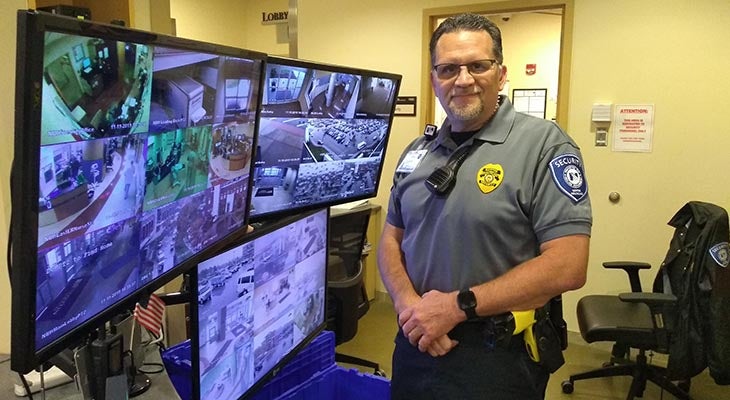 John Fremow was put on this earth to protect and serve. The retired National Guardsman and corrections officer now provides security for Norton Brownsboro Hospital. He’s often called to the emergency department to prevent interruptions while doctors work on an intense stroke cases.

Last year, a stroke nearly killed John. He found himself the patient in one of the same rooms he often protects.

John doesn’t fit the description of someone who’s at high risk for a stroke. The 53-year-old is physically fit, eats well and doesn’t smoke. So it was a shock in March 2019 — while John was watching a movie with his girlfriend at his Taylorsville home — he started slurring his words. Then, he fell and couldn’t get up.

“It hit me like a ton of bricks,” John said.

BE FAST to Spot the Signs of a Stroke

John’s girlfriend knew the signs of a stroke and immediately called for help.

“I knew I was in the right place,” John said.

Tom L. Yao, M.D., neurosurgeon with Norton Neuroscience Institute, was the physician on call that evening. It didn’t take long for him to find the clot in John’s brain.

“There was a significant area of John’s brain that wasn’t getting blood flow,” Dr. Yao said. “Unfortunately, once brain cells die, they don’t recover. We needed to act quickly.”

Dr. Yao used a retrievable stent — a tiny tool threaded into John’s brain through his blood vessels — to remove the clot. Blood flow returned to John’s brain, and he showed immediate improvement.

After about a month of rehab, John was able to return to work. He’s hardly showing any effects from his ordeal. In fact, at his job, John walks the halls of Norton Brownsboro Hospital with a new appreciation for the doctors, nurses and staff he helps protect.

“It was that speed of getting here and the treatment that helped me recover so well,” John said.