After rib-cracking CPR, three defibrillations and treatment for heart failure, Keith Drury, 43, is back at work and back to hunting and fishing in his spare time. 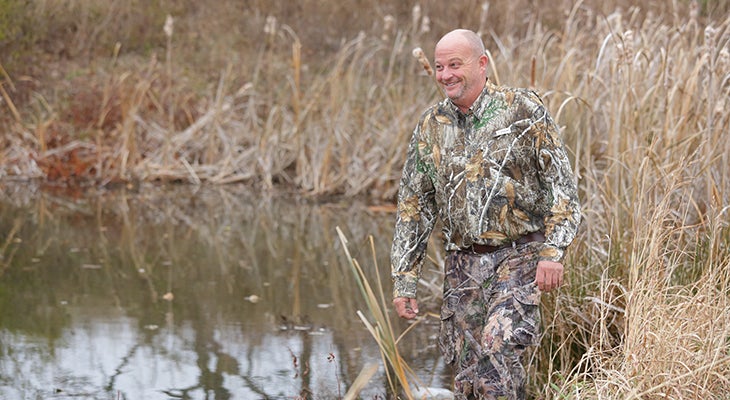 The last thing Keith Drury remembers from the day his heart stopped is driving to a job site near the Kentucky River. He doesn’t remember going into cardiac arrest, the CPR or the emergency helicopter flight to Norton Brownsboro Hospital, where he was put into a medically induced coma to allow his heart to rest and recover.

“Four days later, I woke up and wondered what is going on,” Keith said. “I had no idea why I was in the hospital.”

Keith, from LaGrange, Kentucky, was only 42. When he was brought out of the coma, he was cared for by specialists with the Norton Heart & Vascular Institute Advanced Heart Failure and Recovery Program. He was experiencing heart failure. He didn’t feel pain from the cardiac arrest, but his ribs hurt. They were cracked during CPR, a common occurrence, performed by workers at the job site before the helicopter arrived to take him to the hospital. He’d also been shocked three times with a portable automatic external defibrillator (AED).

Keith blames his cardiac arrest on the stimulants he was taking because he was tired all the time. He’d been taking prescription Adderall for 10 years.

“The stimulants were speeding up his heart rate, which increased his heart’s demand for oxygen and made it more susceptible to irregular heart rhythms,” said Dana M. Newhouse, APRN, nurse practitioner with the Advanced Heart Failure and Recovery Program. “Over time, that persistent elevated heart rate caused a weakening of his heart muscle and the ability to pump properly, causing him to have heart failure.”

Monitoring Your Heart From Afar

From Heart Failure to Heart Recovery

From cardiac arrest to heart failure, and now back to an active life, Keith said he was put at ease by Dana, nurse Sarah Del Busto, R.N., and others on the team.

“It was very easy to talk to them. I could be very honest with them,” he said.

Two days after waking up from the coma, Keith was discharged from the hospital. He wore a LifeVest, a wearable cardioverter defibrillator. The vest, worn directly against the skin, detects when the heart has gone into a life-threatening rapid rhythm and shocks the heart back into a normal beat.

“The LifeVest and frequent follow-up visits allowed us to monitor him closely and quickly adjust his medications and assist his heart function,” Dana said.

When Keith left the hospital, his heart was pumping at just 20%. After his participation in the recovery program, he was up to 40% and is still making progress. A normal rate is 50% or higher.

As part of the holistic care approach offered by the advanced heart failure team, Keith began going to a Norton Cardiac & Pulmonary Rehabilitation Center, where he worked his way up to walking fast for an hour on the treadmill. He also was tested for sleep apnea and now uses a continuous positive airway pressure (CPAP) machine when he sleeps, which has made a world of difference. He’s off prescription stimulants, takes his heart medicine and limits caffeine to two cups of coffee a day.

Now 43, the husband and father of three is back at work with the phone company, where he is a construction manager, and back to hunting and fishing in his spare time.

“I feel like a million bucks,” he said. “I’m not someone who traditionally went to the doctor. It was scary for everybody. To this day I don’t fully appreciate what happened to me.”