Our trainee is having a birthday, so let’s talk about triathlon age groups | Norton Healthcare Louisville, Ky.

Our trainee is having a birthday, so let’s talk about triathlon age groups

Our trainee is having a birthday, so let’s talk about triathlon age groups 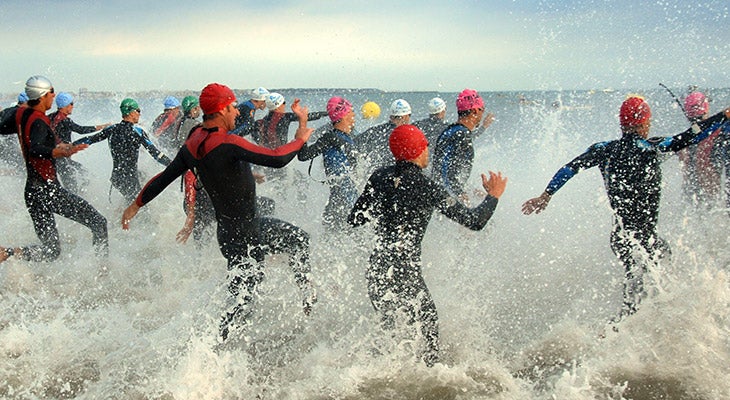 Since it is my birthday this week, it made me think of age groups.

I’ve always competed in the 35 to 39 age group for triathlons, since I got a late start on this stuff.

This will be my last year in this group.

Master of what? Nothing — except maybe turning 40.

Since I started doing triathlons — all of them shorter than the Ironman — I have a general thought process for each age group:

18 to 24: Wow, this seems like a big gap. Think about how much your body changed between 18 and 24! Also, could you even imagine doing an Ironman when you were 18 years old? I could barely do my laundry.

25 to 29: This is the group that has all the speed, but hasn’t mastered the endurance yet. I typically pass these folks on the run portion.

30 to 34: This group seems to be a mix of rookies and folks who have done it for a few years.  They are competitive and will seek out those in their age group to pass. Also, a big body-changing gap between 30 and 34, so lots of different shapes and sizes in this group.

35-39: My people! We are really starting to get the hang of this endurance thing! Maybe still a bit competitive, but realistic.

40-44: What I consider to be the “fasties.” These people have done it for years, have several big races under their belts and can go out and compete. More often than not, I get passed by this age group. They are competitive, but still very helpful and friendly on the course.

45-49: Same as above, but more experience. Maybe starting to fall out of the triathlon habit due to injury or lack of interest. Also, the group that could get even better if they gain the advantage of flexible work hours and financing.

50-54: The “old pros” can spend all their time on training, and it becomes their biggest hobby. Many have enough money to buy fancy gadgets. If the gadgets don’t make them faster, they seem to take a few years off the calendar. They’ll offer any and all tips they can to those around them.

55-59: The “age group Kona qualifiers,” named for the lack of numbers in their age group. (The Ironman World Championship is held in Kona, Hawaii).

60 to 64: You wonder when they started doing triathlons. I started five years ago and already feel broken.

80-plus: We love to see them out there, but are seriously concerned for their safety.

Professionals: If everyone had access to what they have, we would all do much better! I’m much more a fan of the average folks.