The stroke-heart attack link for migraine sufferers and ways to lessen it | Norton Healthcare Louisville, Ky.
Masks Required in All Patient Care Facilities
A Kentucky executive order requires patients, visitors and employees to wear masks in patient care facilities such as hospitals and doctors’ offices. Norton Healthcare requires children ages 2 and older to wear masks in health care settings in both Kentucky and Indiana locations. 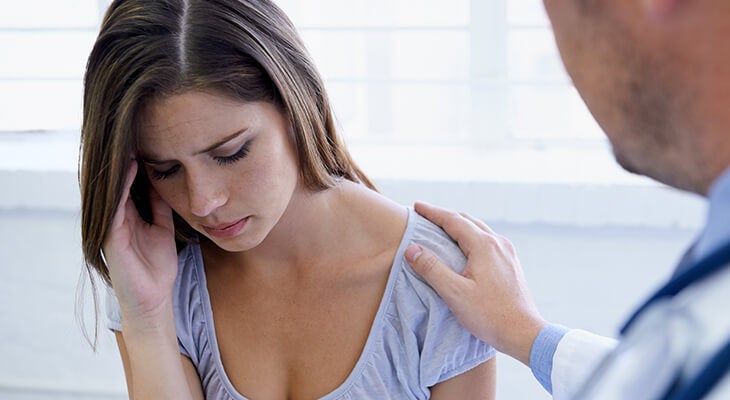 Some migraine sufferers face a higher risk for stroke and heart attack, but there are ways to lessen the danger, according to Brian M. Plato, D.O., headache specialist and medical director at Norton Neuroscience Institute.

There are two types of migraine: with or without aura.

Migraine with aura (MA) is linked to a higher risk for stroke and heart attack. Migraine aura typically precedes the headache pain. It can be flashes of light, blind spots or other changes in vision.

Migraine without aura (MO) does not seem to pose the higher stroke or heart attack risk that migraine with aura does. Most people with migraine do not have aura. Some people get both types of migraines.

Studies of women with MA attacks found the risk for stroke is independent of typical heart disease risk factors like age, diabetes and high blood pressure. Research looking at data from a number of studies found migraine is associated with a 1.5-fold increased stroke risk.

Women who smoke and have migraines with aura should avoid oral contraceptives that contain estrogen, according to Dr. Plato, because the additive risks from all three increase the risk of stroke significantly.

The link between migraine and heart disease does not mean migraines are the cause of a stroke or heart attack. Dr. Plato said the higher risk is likely the result of several factors. Possible contributors include:

Dr. Plato’s advice to patients is to work on lifestyle changes that decrease stroke and heart attack risks, including regular aerobic (cardiovascular) exercise, a healthy diet and not smoking.

Since the frequency of MA attacks appears to be associated with higher cardiovascular risk, Dr. Plato said migraine preventive treatment might be beneficial.

Younger women shouldn’t be overly concerned about the link between migraines and stroke or heart attack. For women under 50, even those who have MA, the odds of having a stroke is lower than being struck by lightning.