In early 2021 the two relatives gained something else in common — they experienced potentially deadly strokes just three weeks apart and were treated by the same neurosurgeon. 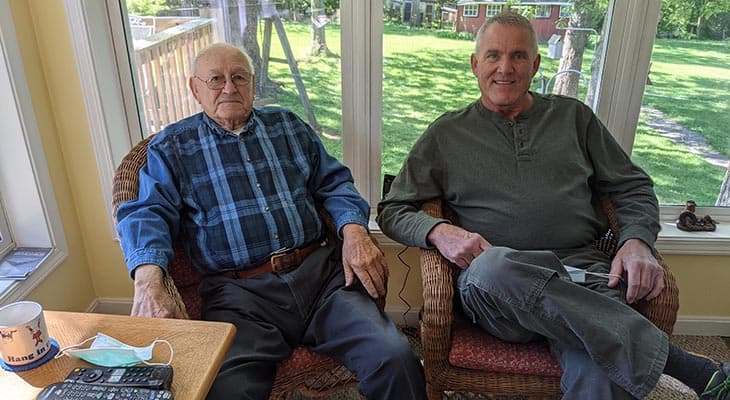 Duke Nichter is more a second dad to Paul Nichter than their true family relationship of uncle and nephew. For decades, they’ve enjoyed hunting, fishing and sharing life’s journey together. In early 2021, the two close relatives gained something else in common — they experienced potentially deadly strokes just three weeks apart. Both men also ended up being treated by the same neurosurgeon.

Duke, 89, was in his yard splitting wood the week before his stroke. He’d had triple-bypass surgery nearly 30 years ago but otherwise showed no signs of any major health issues. On March 30, Duke sat down in his living room to do a puzzle. He fell to the ground.

“I don’t remember anything that happened,” Duke said.

Fortunately, Duke’s wife called a neighbor who rushed over. The neighbor found Duke on the ground. He was unresponsive, and one side of his face was sagging. An emergency medical services team quickly arrived at the scene to transport him to Norton Brownsboro Hospital.

“There’s another hospital that’s closer to his [Duke’s] home,” said Karen Nichter, Duke’s daughter. “But the EMT recommended going to Norton Brownsboro Hospital because it’s a designated Comprehensive Stroke Center. And I’m glad they did.”

Duke was fading fast when he arrived at Norton Brownsboro Hospital. He immediately came under the care of Mahan Ghiassi, M.D., neurosurgeon with Norton Neuroscience Institute.

“Duke had very little brain activity on one side,” Dr. Ghiassi said. “We needed to get blood flow quickly or the brain would die out.

Dr. Ghiassi performed a mechanical thrombectomy, a minimally-invasive procedure using specialized equipment to remove a clot from a patient’s artery. He went through the artery in Duke’s leg. Within about 20 minutes, blood flow was restored to Duke’s brain.

“Once he woke up, he was pretty much back to being dad,” Karen said. “He’s passed all the walking and strength and cognitive tests and only needed a little physical therapy. He was barely in the hospital for two days.”

Norton Brownsboro Hospital is a  Comprehensive Stroke Center, representing the highest level of stroke care certification, and is the at the core of Norton Neuroscience Institute’s stroke care network.

Even though Duke was home, he needed care while he continued to recover. Paul, 61, stayed with Duke one afternoon in early April. What Paul didn’t know then was that he was about to experience a stroke just days later.

“I was at home talking to some friends who came by the house,” Paul said. “Apparently I was slurring my words.”

After the friends left, Paul went to his garage to work. The friends suspected something was up and went back to tell Paul’s wife, Linda. They then walked into the garage to find Paul on the floor. He was conscious but couldn’t move the left side of his body. Knowing what Duke had gone through weeks before, they knew immediately that Paul was having a stroke.

Like Duke, Paul was transported to Norton Brownsboro Hospital. There waiting for him was Dr. Ghiassi. The scans revealed Paul had a clot in the same artery as Duke, but on the opposite side of the brain. Paul was losing blood flow every second.

“You see patients who refer family members, but they are for elective procedures, not emergency procedures. I’ve never had family members present with acute strokes, especially not within a couple of weeks of each other,” Dr. Ghiassi said.

Dr. Ghiassi performed a mechanical thrombectomy on Paul, but unlike with Duke, he went through the artery in Paul’s wrist. Brain function returned almost immediately.

“There are advantages of treating a stroke radially [though the arm], as it’s less invasive and allows for quicker recovery time,” Dr. Ghiassi said. “Due to Duke’s age, we needed to go in through the leg, but both procedures are very effective.”

After two days, Paul left the hospital. He and Duke continue to deal with minor effects from their strokes, but for the most part they’re back to life as usual.

What caused their strokes?

According to Dr. Ghiassi, genetics likely played a role in both Paul’s and Duke’s strokes, as well as a family history of heart issues. However, he also attributed the timing of both as likely the product of bad luck.

“The positive is that because of Duke’s stroke, the family knew what to do when Paul had his stroke,” Dr. Ghiassi said. “That quick action very well could have saved his life.”

“If you’re having a stroke, get to Norton Brownsboro,” Duke said.