With reconstructed knee, Louisville goalie returns to the pitch with confidence and plans for college | Norton Healthcare Louisville, Ky.

With reconstructed knee, Louisville goalie returns to the pitch with confidence and plans for college

With reconstructed knee, Louisville goalie returns to the pitch with confidence and plans for college

After surgery to reconstruct his knee, Trey Murphy faced a long road of rehabilitation. He was determined to get back on the field and play again. 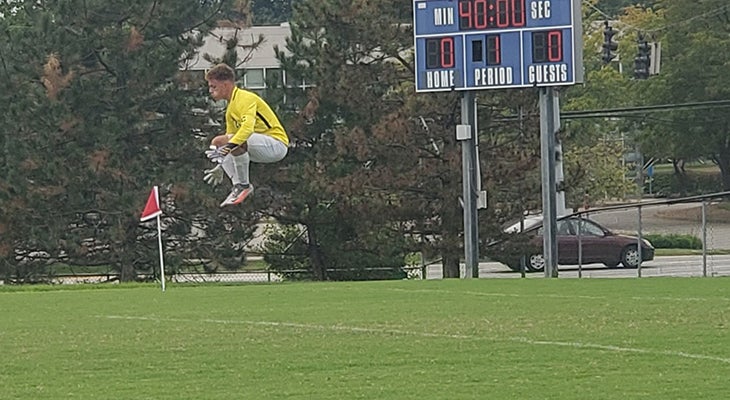 Soccer is a big part of Gregory “Trey” Murphy’s life. Trey is a goalie, and he plays on both a high school team and a travel team.

Soccer came to a sudden and painful halt for Trey in March 2019.

In warmups, Trey went to step one way but his leg got caught under him, and he badly injured his knee. Trey could barely walk off the field. He knew the injury might mean he’d never play soccer again.

“That definitely came across my mind. That wasn’t easy at all,” Trey said.

Trey went to Norton Orthopedic Institute a few months later, where surgeons reconstructed his right anterior cruciate ligament (ACL) — a ligament toward the front of the knee. They also repaired his medial meniscus — cartilage on the inside of the knee that cushions and stabilizes the joint.

After surgery, Trey faced a long road of rehabilitation. He was determined to get back on the field and play again.

“I just wanted to get back as quick as I could. It was a bit frustrating at first,” Trey said.

Norton Sports Health is the official health care provider of the Louisville Cardinals and the official sports health provider for 19 area high schools.

Trey went to KORT for rehabilitation, where he did physical therapy with Nick Weickel, PT, DPT, OCS; and Josh Bixler, PT, DPT, OCS.

Once he’d built up the mobility in his knee, Trey worked with Brock Martin, strength coach with Norton Sports Performance, training alongside high school, college and professional athletes.

“I kind of treated it like a workout every day, honestly. What can you accomplish in that hour?” Trey said. “It was always: How can I get back on the field?”

“It was a process. It was always: ‘What’s your goal? We’re going to make it happen,’” she said.

“Working with our partners at KORT for physical therapy and our recent addition of Norton Sports Performance, Norton Orthopedic Institute provides a continuum of care,” said Ryan J. Krupp, M.D., orthopedic surgeon with Norton Orthopedic Institute and executive medical director, orthopedics, at Norton Sports Health. “Patients work with physicians, therapists and trainers who know their condition, their injury and their goals.”

Back on the field with confidence

All Trey’s hard work has paid off. He’s playing soccer again this fall for Kentucky Country Day, where he is a senior and captain of the team.

“My knee is great. I’ve been doing everything: goal kicks, punts,” said Trey, who has been playing soccer since he was 3.

At his first game back, Angela captured a photo of Trey doing his pregame jump ritual.

“This picture symbolizes more than I can express,” Angela said. “After 533 days from the date of his injury, it’s hard to believe. As his mom I want to cry and thank every single person involved that was a part of his journey.”

Trey would like to keep playing soccer in college. Trey has always played goalie. As goalie, he positions the players in front of him and, of course, serves as the last line of defense. Chief among the attributes necessary to be a good goalie is confidence, according to Trey.

After surgery and dedicated physical therapy, Trey has his confidence back — along with the strength and mobility in his knee. In goal for the first game of the season, Trey said it felt like being home.