Young women at risk for breast cancer, too

Young women at risk for breast cancer, too 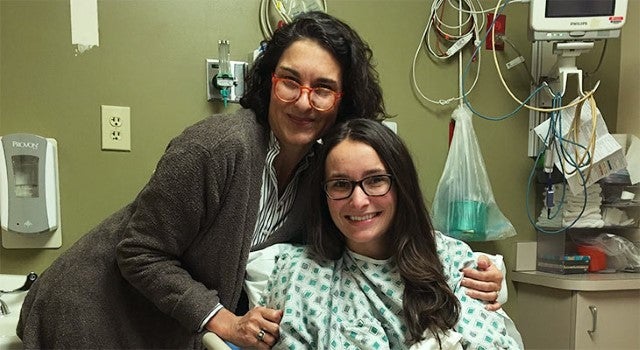 After finding a suspicious lump in her breast at age 24, Betsy Barefoot quickly got the diagnosis many in their 20s rarely even think about. She shares her journey of going through a scary journey at a young age.

My name is Betsy. I am 25 years old and I am from Louisville, Kentucky. I want to share the story of my breast cancer journey with you.

In March 2016, I found a marble-sized lump in my right breast. Thankfully, it was close enough to the skin for me to feel. I didn’t think much of it, but I eventually told my mom, who sent me to get an ultrasound.

I had both breasts examined via ultrasound in April. It turned out that I also had something in my left breast, even though I could not feel it. It had a classic fibroadenoma almond shape, so my doctors were not too worried. The right side was a little abnormal-looking, but because of my age and no family history of breast cancer, the doctors did not have any reason to suspect cancer. To be sure, they had me come back for a biopsy.

I received the call that set all of this into motion on April 19, 2016. The lump on the left side was a fibroadenoma like they thought. But the one on the right side was cancerous. Specifically, it was invasive ductal carcinoma, measuring about 1.4 centimeters. I later would find out that it was stage 1A, estrogen receptor-positive (ER+), progesterone receptor-positive (PR+) and human epidermal growth factor receptor 2 (HER2) negative.

On May 19, 2016, I had a bilateral, nipple-sparing mastectomy with a sentinel lymph node biopsy. Eventually, I will have reconstruction surgery. During the surgery, my awesome team, C. Matthew Brown, M.D., and Brian P. Thornton, M.D., Ph.D., got clear margins and found that no nodes were affected by the cancer. They removed three nodes from my right side. Recovery from the mastectomy was surprisingly not that bad. The tumor was sent off for further testing.

My results from a test called Oncotype DX indicated that chemotherapy was the best next step. Because of my age, I had to think about the possibility that chemotherapy might damage my reproductive organs to the point of infertility. So before starting chemo, I decided to undergo a procedure to retrieve and freeze eggs from my ovaries for future use. The outcome was disappointing, with only one egg retrieved, and complications led to internal bleeding and a trip to the trauma bay of the emergency room along with an overnight stay. Thankfully, I did not have to have emergency surgery to stop the bleeding, nor did I need a blood transfusion. It took a few weeks for the blood to resorb, but eventually it did on its own.

I started chemotherapy in June 2016. I received four doses of the drug combination TC (Taxotere and cyclophosphamide) every three weeks. Like a lot of women (and men) who are told they need chemo, my first thought was about losing my hair. During my treatment, I used Penguin Cold Caps and was able to keep almost all of my hair! It has thinned quite a bit, but it is really only noticeable to me. Keeping my hair was important for so many reasons, and if anyone is facing chemo, I highly recommend the cold cap therapy. It was so, so worth it!

My treatment will continue for the next five years in the form of hormone therapy to suppress my body from producing estrogen and progesterone (because of the ER+/PR+ cells of my tumor). I will continue to see my oncologist frequently during that time.

Now that I am done with chemotherapy, I hope to continue to find ways to give back to the breast cancer community and support the women and men facing this disease. My journey certainly was not easy, but sadly, I actually think I did have it easy. Larger tumors, positive lymph nodes, metastasis, harsher and longer chemo regimens, infertility … there are so many ways things could be worse for me and I will never forget that.