Can sleep apnea cause a stroke? | Norton Healthcare Louisville, Ky.

The sleep apnea and stroke connection

The sleep apnea and stroke connection

More than 12 million Americans have sleep apnea. Most are undiagnosed or untreated. 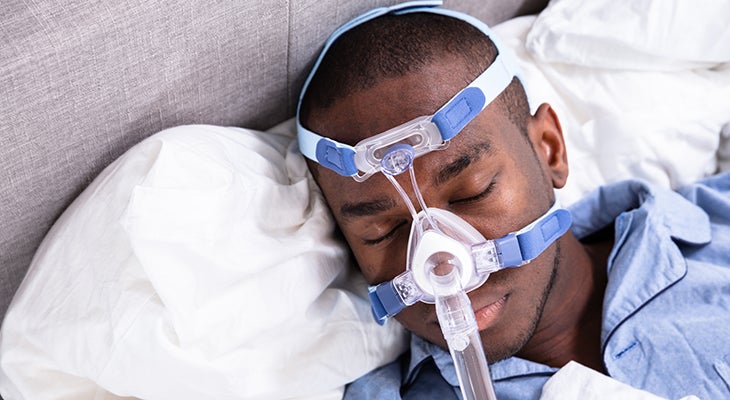 Snoring loudly is a telltale sign of obstructive sleep apnea and a warning you may face a higher risk of stroke.

“Sleep apnea is a common but under recognized risk factor for stroke. If you or a loved one has issues with excessive daytime sleepiness, snores loudly or gasps for air during the night, you should be screened by a health care provider for sleep apnea,” said Danny R. Rose Jr., M.D., a neurologist with Norton Neuroscience Institute.

More than 12 million Americans have sleep apnea. Most are undiagnosed or untreated.

Snoring can be a sign your brain is not receiving enough oxygen. If you stop breathing for 10 seconds or longer while you’re sleeping, you may have obstructive sleep apnea.

During obstructive sleep apnea, the body works hard to open the airway and breathe during these episodes, releasing stress hormones and increasing blood pressure. Over time, this can lead to uncontrolled high blood pressure and a heart condition called atrial fibrillation, or A-fib. High blood pressure, which is also called hypertension, and A-fib are both known risk factors for stroke.

Can you have a stroke in your sleep?

“Strokes during sleep are especially challenging because of the time-sensitive nature of stroke treatment. Our treatment options are often more limited in these situations, as many of these patients have irreversible brain damage before arriving to the hospital,” Dr. Rose said.

Not only is sleep apnea a risk factor for stroke, untreated sleep apnea is associated with poor outcomes after stroke. Stroke is the second-leading cause of death worldwide.

“The rate of sleep apnea is much higher in patients who have experienced a stroke, compared with the general population. Both stroke survivors and health care providers should be aware of this risk, and screening for symptoms of sleep apnea should be considered in any patient who has had a stroke,” Dr. Rose said.

Lifestyle changes like losing weight and quitting smoking can help with milder cases of sleep apnea. Moderate or severe sleep apnea can be treated with a continuous positive airway pressure (CPAP) machine. The CPAP machine keeps your airway passages open. This prevents snoring and apnea.

“Consistent use of CPAP is effective at treating sleep apnea and has been shown to reduce stroke risk factors. Adherence to nightly usage can be challenging for some patients, especially initially as they are acclimating to this change in their sleeping habits. I encourage patients who are having trouble with using their CPAP to speak with their doctor to ensure their equipment fits and functions correctly,” Dr. Rose said.

Answer each question. Your score will appear at the end of the survey, then learn more about what your score means in the scoring guide.

Create your own user feedback survey

Use your total points out of 20, displayed at the top of the quiz when you submit your answers.